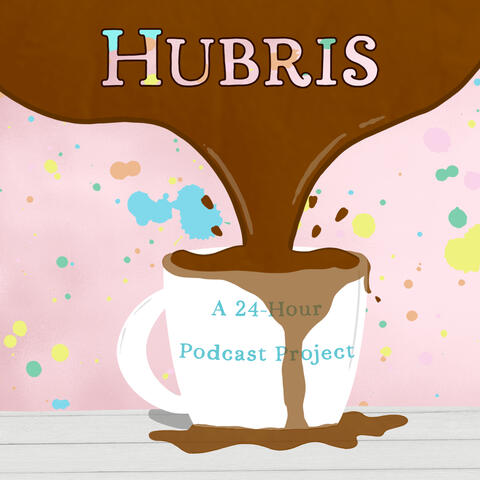 Can you make a fiction podcast from scratch in 24 hours?
We're sure going to try!

Round 2 of Hubris is currently releasing weekly in our podcast feed.

We've got two rounds under our belts and Round 3 is starting to feel a little bit "go big or go home"!

If you'd like to participate in future rounds of Hubris, complete our sign-up form to be contacted when we start working on the next round!

Once we begin releasing episodes of Hubris, you'll be able to find links to individual episode information and our transcripts here!

Hubris is a labor of love from a chaotic group of podcasters who decided a 24-hour podcast challenge sounded like a good idea.

Six teams participated in the first round of episode creation in December 2020, each making a standalone piece in a single weekend. The second round was made up of ten teams and took place in March 2021. The upcoming third round will be capped at ten teams and will take place in August/September 2021, with dates to be announced.

Subscribe to Hubris here or wherever you get your podcasts.

Sign Up for future rounds of
Hubris: A 24-Hour Podcast Project

Want to participate in future rounds of Hubris?
Complete the form below to be contacted when we start working on the next round!

Teams for Hubris Round 2 were given the theme of "Spring" and allowed to outline and brainstorm their episodes ahead of time. We increased the number of teams for this round from six to ten, and all were able to complete their episodes within the 24-hour period!

For the first round of Hubris, our teams were randomly assembled and provided with the theme "All-Nighters". Teams were allowed to brainstorm ahead of time, but all the episodes were made within 24 hours on December 12th and 13th, 2020.

Episode 1: "HOPE ON THE HORIZON"

Miles above the Earth, an astronaut faces a life-or-death repair. Safe on the ground down below, an amateur ham radio operator struggles to stay awake for an extra-special aurora. Among solar storms and accidental connections, a little perspective might be just what they need.
Content Warnings: Allusion to death, a radiation storm, and extreme space weather.

Episode 2: "EXIT, PURSUED BY A GHOST"

An understudy is tasked with learning the lead role overnight before making their big debut. The trouble is, that’s a bit difficult to do when the theatre is distractingly haunted...will the ghosts help or hinder their attempts to get off-book?

Sometimes you think you're alone in the building, working all night, facing a deadline come morning. And then sometimes, the deadline is... surprisingly literal. Four unlikely companions face uncertainty together while the world falls apart around them in the last few minutes before dawn. Not for the faint of heart.

Content Warnings: Sirens, screams, explosions, depictions of violence and gore, and themes of horror. This episode is designed to be listened to on headphones or stereo speakers.

Every adventurer knows that Eliana is the artificer to see about all your broken magical equipment. But when a brash and foolish customer barges into her shop with a talking mirror on the fritz, what she thinks will be a simple repair job becomes something else entirely. There's much more to this chattering artifact than meets the eye.

A found family of five vampires (and their vampire pup) pull an all-day-er on their family vacation to visit all the best tourist traps in Paris.

At the stroke of midnight two friends will try and summon a spirit to grant their wish, but nothing is ever that easy...

Episode 1: "Not Safe For Work"